The Neumann U47 is a large-diaphragm condenser microphone manufactured by Georg Neumann GmbH during the years 1949-1965.

The U47 used the M7 capsule originally developed for the CMV 3 microphone ("Neumann bottle"). Its PVC membranes unfortunately tended to dry out with age, however, and in 1960 the M7 was superseded by the K49, a capsule with similar acoustical design but membranes made of age-resistant biaxially oriented PET film.

The U 47's circuitry was based on the Telefunken VF 14 M vacuum tube (a specially-selected VF 14; the VF 14 was an RF pentode for various functions in military field radios; the discontinuation of the U 47 was caused primarily by the decision by Telefunken to halt production of the VF 14. In some ways the functional successor to the U 47 was the U 67. 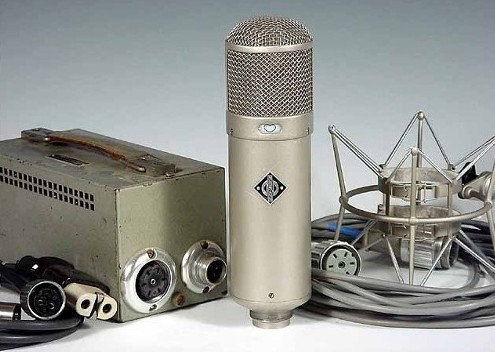 Custom tubes equivalent to the VF14 have been manufactured specifically for the U 47, by Telefunken and others. Beginning in 1962, Neumann offered a fully functional Nuvistor, small signal receiving tube replacement kit for the VF14 and required minor circuit modification.

The U 47 is well known for its clear sound, with a distinct emphasis in its upper-midrange frequency response. It has been used in countless famous recordings. The Beatles' producer George Martin used the U 47 extensively in the group's recordings and claimed it was his favorite microphone. 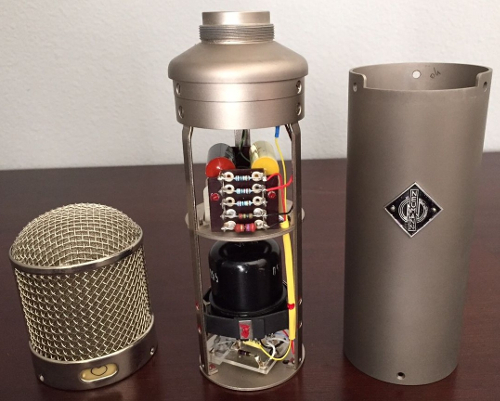 The U 48 was identical to the U 47 except for the available polar pattern combinations (cardioid and figure of eight instead of cardioid and omnidirectional). According to Neumann: The Microphone Company. by Anselm Roessler, the U 48 was not introduced by Neumann until 1957. However, according to representatives at Georg Neumann GmbH, examples of the U48 existed as early as 1950.

The U 47 fet, a solid-state microphone with yet a third capsule, the K 47, had a headgrille identical to that of the original U 47 but with solid-state circuitry; it was produced by Neumann during the years 1969-1986. It was intended to recapture the sound of the original U 47, but enjoyed only limited success. However, the U 47fet became well known among recording engineers as a bass drum microphone. The U47fet also gained great popularity among double-bass players in the jazz world.

Do you have content, to add, about the Neumann U47 Microphone or associated topics? Please feel free to Share it, here!

What other Visitors have said about the Neumann U47 Microphone