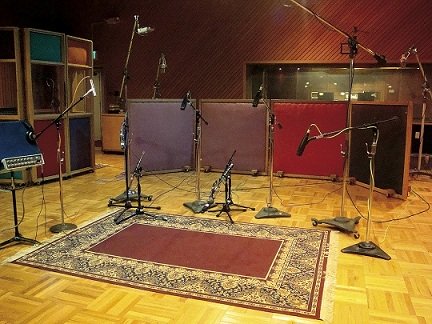 A microphone is an acoustic-to-electric transducer or sensor that converts sound into an electrical signal. Microphones are used in many applications such as telephones, tape recorders, karaoke systems, hearing aids, motion picture production, live and recorded audio engineering, FRS radios, megaphones, in radio and television broadcasting and in computers for recording voice, speech recognition, VoIP, and for non-acoustic purposes such as ultrasonic checking or knock sensors.

Both Thomas Alva Edison and Emile Berliner filed patent applications for the carbon microphone, in March and June 1877 respectively. After a long legal battle, Edison emerged the victor, and the Berliner patent was ruled invalid by both American and British courts.

The sensitive transducer element of a microphone is called its element or capsule. A complete microphone also includes a housing, some means of bringing the signal from the element to other equipment, and often an electronic circuit to adapt the output of the capsule to the equipment being driven. A wireless microphone contains a radio transmitter.

Early microphones did not produce intelligible speech, until Alexander Graham Bell made improvements including a variable resistance microphone/transmitter. Bell's liquid transmitter consisted of a metal cup filled with water with a small amount of sulfuric acid added. A sound wave caused the diaphragm to move, forcing a needle to move up and down in the water. The electrical resistance between the wire and the cup was then inversely proportional to the size of the water meniscus around the submerged needle. Elisha Gray filed a caveat for a version using a brass rod instead of the needle. Other minor variations and improvements were made to the liquid microphone by Majoranna, Chambers, Vanni, Sykes, and Elisha Gray, and one version was patented by Reginald Fessenden in 1903. These were the first working microphones, but they were not practical for commercial application. The famous first phone conversation between Bell and Watson took place using a liquid microphone.

Do you have content, to add, about Microphones or associated topics? Please feel free to Share it, here!

Return from Microphones to History of Recording - Homepage