Magnetic tape was invented for recording sound by Fritz Pfleumer in 1928 in Germany, based on the invention of magnetic wire recording by Valdemar Poulsen in 1898. 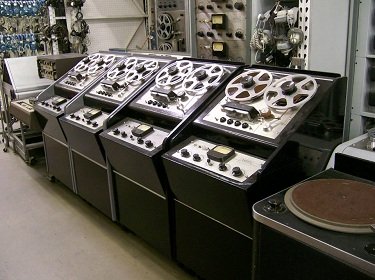 An important discovery made in this period was the technique of AC biasing which improved the fidelity of the recorded audio signal by increasing the effective linearity of the recording medium.

Due to the escalating political tensions, and the outbreak of World War II, these developments were largely kept secret.

Although the Allies knew from their monitoring of Nazi radio broadcasts that the Germans had some new form of recording technology, the nature was not discovered until the Allies acquired captured German recording equipment as they invaded Europe in the closing of the war. It was only after the war that Americans, particularly Jack Mullin, John Herbert Orr, and Richard H. Ranger were able to bring this technology out of Germany and develop it into commercially viable formats.

A wide variety of magnetic tape sound recording equipment and formats have developed since, most significantly reel-to-reel audio tape recording and Compact Cassette.

Do you have content, to add, about Magnetic Tape Recorders and Reproducers - "Recording with Tape" or associated topics? Please feel free to Share it, here!

My understanding (I believe the story is told by Les Paul in a documentary, possibly "Chasing the Sound") is that Colonel Ricky Ranger brought a tape recorder …

Do you want something understandable that fully covers magnetic tape recorder biasing? I taught graduate classes at the Institute of Audio Research. …

After a short history in the development in Disc manufacture, disc cutters and related equipment Presto entered the Tape machine Business in about 1948. …

The Australian company, Optro, built 16 and 24 track two inch tape machines. These where designed by Mr Graham Thirkle, the company owner/director who …

Ohio Recorders Not rated yet
Ohio has a historic place in the progress of Tape recording in the US. Cleveland is the home of Brush Development Corporation who brought to market in …

Paul Landrus II - Pro Recording Artist - Pianos - Sound Tech 1. Not rated yet
In review of the Industrials of Magnetic Tape Recorders, thousands, if not millions of Audio Music Production Tape Master Session Archives, needs to be …