Recording Studios and their History 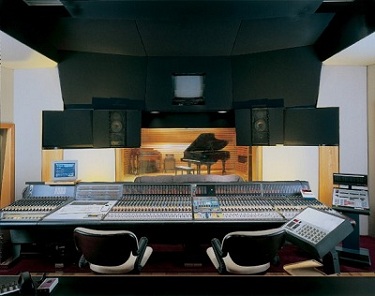 A recording studio is a facility for sound recording and/or mixing. Ideally both the recording and monitoring spaces are specially designed by an acoustician to achieve optimum acoustic properties (acoustic isolation or diffusion or absorption of reflected sound that could otherwise interfere with the sound heard by the listener).

Recording studios may be used by record musicians, voice over artists for advertisements or dialogue replacement in film, television or animation, foley, or to record their accompanying musical soundtracks. The typical recording studio consists of a room called the "studio" or "live room", where instrumentalists and vocalists perform; and the "control room", where sound engineers operate professional audio for analogue or digital recording to route and manipulate the sound.

Often, there will be smaller rooms called "isolation booths" present to accommodate loud instruments such as drums or electric guitar, to keep these sounds from being audible to the microphones that are capturing the sounds from other instruments, or to provide "drier" rooms for recording vocals or quieter acoustic instruments.

Recording studios are carefully designed around the principles of room acoustics to create a set of spaces with the acoustical properties required for recording sound with precision and accuracy. This will consist of both room treatment (through the use of absorption and diffusion materials on the surfaces of the room, and also consideration of the physical dimensions of the room itself in order to make the room respond to sound in a desired way) and soundproofing (to provide sonic isolation between the rooms). A recording studio may include additional rooms, such as a vocal booth - a small room designed for voice recording, as well as one or more extra control rooms.

Recording Studios and their History

Do you have content, to add, about Recording Studios and their History or associated topics? Please feel free to Share it, here!

What other Visitors have said about Recording Studios and their History

Mojo Music Studios is located in the beautiful Adelaide Hills in South Australia, Australia. It has full analogue and digital recording facilities as …

Pics of the Capitol Records (Hollywood) Studio B system

Having bought an existing 8-track studio in San Jose, California in 1984, we immediately wanted to upgrade to a higher track count. A friend of mine brokered …

Hi Folks, We are based in Essex in the UK and we are in the process of building a complete mono valve/tube recording studio in a little building. 40ft …

Ingesón Estudios - Bogotá Colombia Not rated yet
Ingesón Estudios was created in 1966 by the eminent Acoustic Engineer, Historian and Musical Critic Manuel Drezner. From its beginnings, Ingesón was distinguished …

RCA Recording facilities worldwide February 1940 Not rated yet
In order to standardize operations worldwide, in February 1940 RCA issued their "Master Reference Book for Disc Recording" as a confidential in-house document. …

Return from Recording Studio History to History of Recording - Homepage