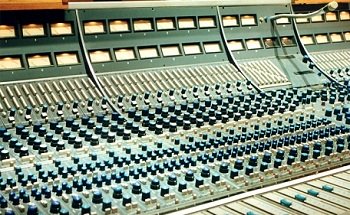 The design of today’s sophisticated recording console is quite complex, due to the multiplicity of devices associated with the mixing network, such as dynamics processing and automation. Many will recall when paralleled battery rheostats were used as mixer controls for broadcasting and motion picture sound recording, and will view the modern console as an outgrowth of the basic principles applied at the time.

With miniaturization, many components are now included in the mixer network, rather than at a remote position. Printed circuit plug-in designed components facilitate replacement in the event of failure. Several different types on analogue solid-state and vacuum tube mixers exist along with solid-state digital mixing desks.

The mixing console can be a complicated piece of equipment but, in its respective fundamental electronic core, its main function is relatively simple. At minimum a mixer consists of a resistive network, which may consist of a passive combining or active combining network, designed to provide a means of combining two or more separate audio sources into one, or more, composite signal(s). The layout of the console may be of either a split design or, the ever popular, in-line design. Below you will discover a variety of diverse, unique and in some cases atypical recording consoles

Do you have content, to add, about Recording and Film Consoles or associated topics? Please feel free to Share it, here!

What other Visitors have said about Recording and Film Consoles

Auditronics was a manufacturer of recording consoles made in Memphis, Tennessee. The original premiere console they introduced, the 501 also dubbed …

This is a picture of the recording console from American Sound Studios, Memphis Tennessee. It featured Universal Audio 610 modules, and was used between …

The "Series 80" has been designed as a direct result of demand from studio owners for a recording console that offers the highest technical specifications, …

National Recording Milwaukee's RCA Consoles BC-3 BC-5 Not rated yet
We went to great lengths to restore and modify these two consoles for doing 50's style recording straight to Ampex full track 350.

MCI & Harrison Not rated yet
David Harrison developed the world's first "in-line" console where the output channel was located above the input channel. This was also the first console …

Other notable consoles Not rated yet
Sphere of Chatsworth California. Created by Don McLaughlin. These were incredible sounding, lovely high-end consoles. Mostly all discrete transistor where …

Return from Recording, Film and Broadcast Consoles to History of Recording - Homepage